What is Myasthenia Gravis?

Myasthenia Gravis is an auto immune disease which is characterised by weakness and rapid fatigue of the muscles which are under our voluntary control. It is caused by a breakdown in the mechanism which our nerves communicate with the muscles. 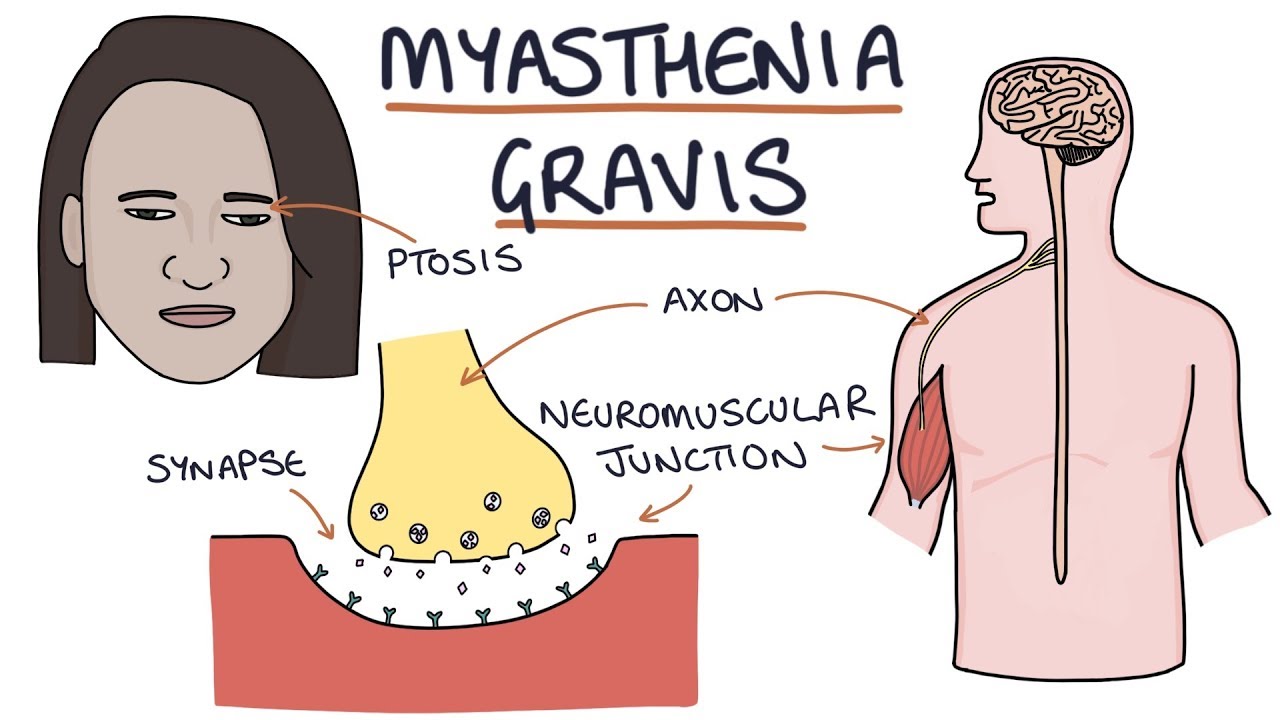 In patients with Myasthenia Gravis, the body’s immune system develop auto antibodies that block or destroy neurotransmitter receptor site and therefore signals from nerves to muscles are not able to pass through the junction of the nerve with the muscle known as neuromuscular junction. This leads to weakness of the muscle leading to symptoms of myasthenia. The commonest antibody is the Acetylcholine receptor antibody (AChR-Ab). Another antibody called muscle specific Tyrosine Kinase Antibody (MuSK-Ab).

Thymus gland is a small gland located in the space between the breast bone and the heart. It is a part of the body’s immune system and believed by researchers to trigger or maintain the production of antibodies that cause myasthenia gravis. It is relatively large sized in infancy and gradually decreases in size after adolescence. In some adults with myasthenia gravis, however, the thymus gland is abnormally large.
About 10-15 % of patients with myasthenia have a tumour of the thymus gland which is known as thymoma. 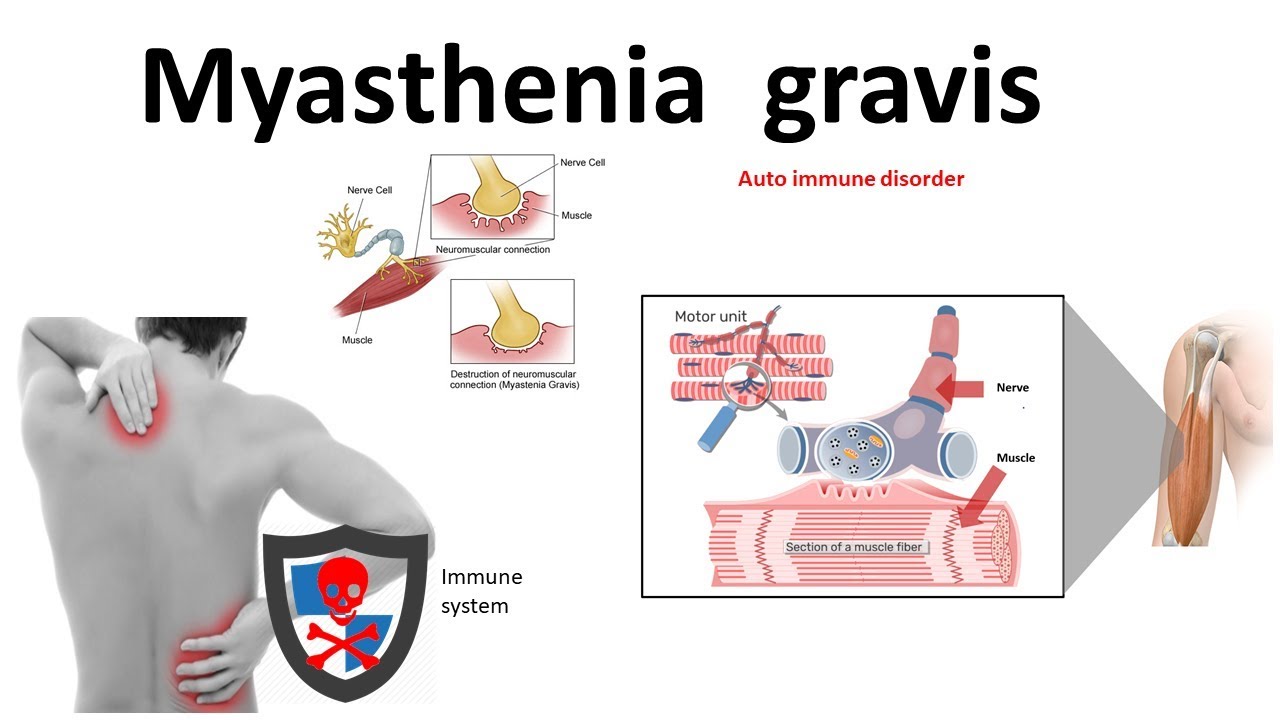 What are the Symptoms of Myasthenia Gravis ?

Myasthenia Gravis can affect any age group. But is more common in women younger than 40 and in men older than 60. The hallmark of myasthenia gravis easy fatiguability and weakness of muscles under our voluntary control. Because symptoms usually improve with rest, muscle weakness can come and go. But most commonly affected muscles are:- 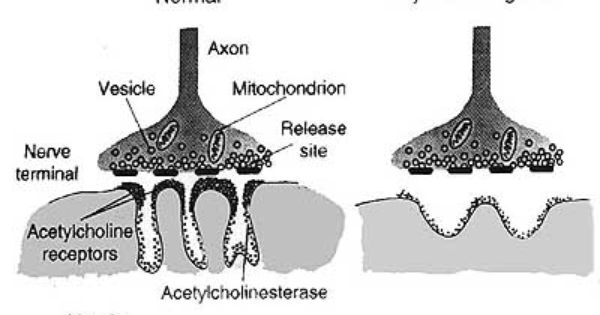 Nearly 50 % 0f patients with myasthenia gravis have symptoms related to involvement of eye muscles as their first problem. These include:
• Drooping of one or both eyelids (ptosis)
• Double vision (diplopia), which may be horizontal or vertical, and improves or resolves when one eye is closed

Some patients on the other hand may have the first symptoms involving the face and throat muscles, such as:
• Impaired speaking. The speech may become soft and have a nasal intonation.
• Difficulty in swallowing with liquids regurgitating out of nose.
• Difficulty in chewing. The muscles used for chewing might wear out halfway through a meal, particularly if you've been eating something hard to chew, such as steak.
• Changed facial expressions. For example, your smile might look like a snarl.

Neck and limb muscles
Combing hair, getting up from chair may become difficult Walking may be trouble some

How is Myasthenia Gravis diagnosed?

History and Clinical Examination – The doctors review the patient symptoms by the way of a detailed medical history and conduct a physical examination. One the diagnosis is suspected, it can be confirmed by various tests. These include: 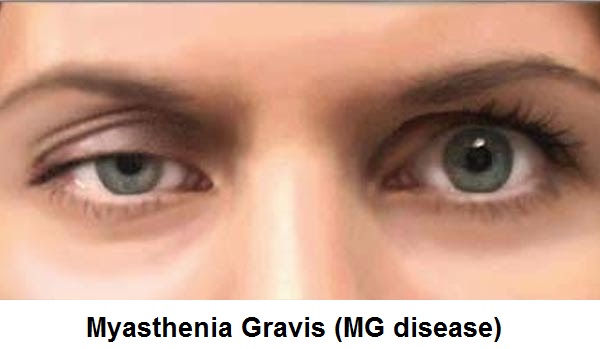 Repetitive nerve stimulation
Through electrodes attached to the skin over the muscles to be tested small pulses of electricity are sent to measure the nerve's ability to send a signal to your muscle. This is done repeatedly to see if its ability to send signals worsens with fatigue.


Single-fiber electromyography (EMG)
This test measures the electrical activity traveling between your brain and your muscle. It involves inserting a fine wire electrode through your skin and into a muscle to test a single muscle fiber.

Edrophonium test
Stage III patients are divided into two sub-stages -
Injection of the chemical edrophonium chloride that results in a sudden, temporary improvement in muscle strength might indicate that you have myasthenia gravis.
Edrophonium chloride blocks an enzyme that breaks down acetylcholine, the chemical that transmits signals from your nerve endings to your muscle receptor sites.

Blood analysis
A blood test will usually be ordered for analysing the presence of auto antibodies like Anti Acetylcholine receptor antibody (AChR-Ab) or MuSK-Ab.

Imaging
A CT scan and or MRI is usually done to look for abnomality in the thymus gland like presence of tumour.
These tests evaluate whether your condition is affecting your breathing.

How is Myasthenia gravis treated ?

Cholinesterase inhibitors Medications such as pyridostigmine (Mestinon, Myestin, distinon) improve the transmission of impulses at the neuromuscular junction and hence improve the weakness. These offer only symptomatic relief and do not cure the disease.

Corticosteroids Corticosteroids such as prednisone inhibit the immune system, limiting antibody production. Prolonged use of corticosteroids, however, can lead to serious side effects, such as bone thinning, weight gain, diabetes and increased risk of some infections.

Immunosuppressants Some patients may need medications that alter your immune system, such as azathioprine (Azoran)san,, Imuran) mycophenolate mofetil (Cellcept), cyclosporine, methotrexate or tacrolimus (Astrograf XL, Prograf). These drugs, which can take months to work, might be used with corticosteroids.
Side effects of immunosuppressants, such as increased risk of infection and liver or kidney damage, can be serious.

The following therapies are usually used in the short term to treat a sudden worsening of symptoms or before surgery or other therapies.

Plasmapheresis (plaz-muh-fuh-REE-sis) This procedure uses a filtering process similar to dialysis. Your blood is routed through a machine that removes the antibodies that block transmission of signals from your nerve endings to your muscles' receptor sites. However, the good effects usually last only a few weeks, and repeated procedures can lead to difficulty accessing veins for the treatment.

Intravenous immunoglobulin (IVIg) This therapy provides your body with normal antibodies, which alters your immune system response. Benefits are usually seen in less than a week and can last three to six weeks.

Monoclonal antibody Rituximab (Rituxan) and the more recently approved eculizumab (Soliris) are intravenous medications used in some cases of myasthenia gravis. These drugs are usually used for people who don't respond to other treatments. They can have serious side effects.

There is no known cure permanent treatment for myasthenia gravis, However it has been shown by research study that surgical removal if thymus gland can lead to significant and long lasting improvement in symptoms. For patients with myasthenia gravis without thymoma surgical removal of thymus gland can lead to remission (that is no requirement of any kind of medication) in approx. 1/3rd of the patient, significant reduction of symptoms in another one third and no change in another one third. So in all a significant proportion of patients will benefit from thymectomy (surgical removal of thymus gland). However the effect of thymectomy may take anywhere from 6 months to several years to appear.
For patients with thymoma surgical removal is indicated irrespective if the fact whether they have myasthenia gravis or not.
A thymectomy can be performed as an open surgery or as a minimally invasive surgery. In open surgery, the surgeon splits the central breastbone (sternum) to open your chest and remove your thymus gland.
Minimally invasive surgery to remove the thymus gland uses smaller incisions. It might also involve:

Video-assisted thymectomy In one form of this surgery, surgeons make a small incision in your neck or a few small incisions in the side of your chest. They then use a long, thin camera (video endoscope) and small instruments to see and remove the thymus gland.

Robot-assisted thymectomy In this form of thymectomy, surgeons make several small incisions in the side of your chest and remove the thymus gland using a robotic system, which includes a camera arm and mechanical arms. This is currently the most advanced method for removal of thymus gland and offers much less morbidity and avoid cutting the breast bone.

We specialise in Robotic Thymectomy and have vast experience in removal of the thymus gland using the surgical robot.
These procedures might cause less blood loss, less pain, lower mortality rates and shorter hospital stays compared with open surgery.