Bronchiectasis is a long-term condition where the airways of the lungs known as bronchi become abnormally widened, leading to a build-up of excess mucus that can make the lungs more vulnerable to infection.
When an infection develops it leads to further damage and in turn more mucus production leading to more infection and thus forming a vicious cycle. Over time this cycle can increase the area of damage inside the lungs. 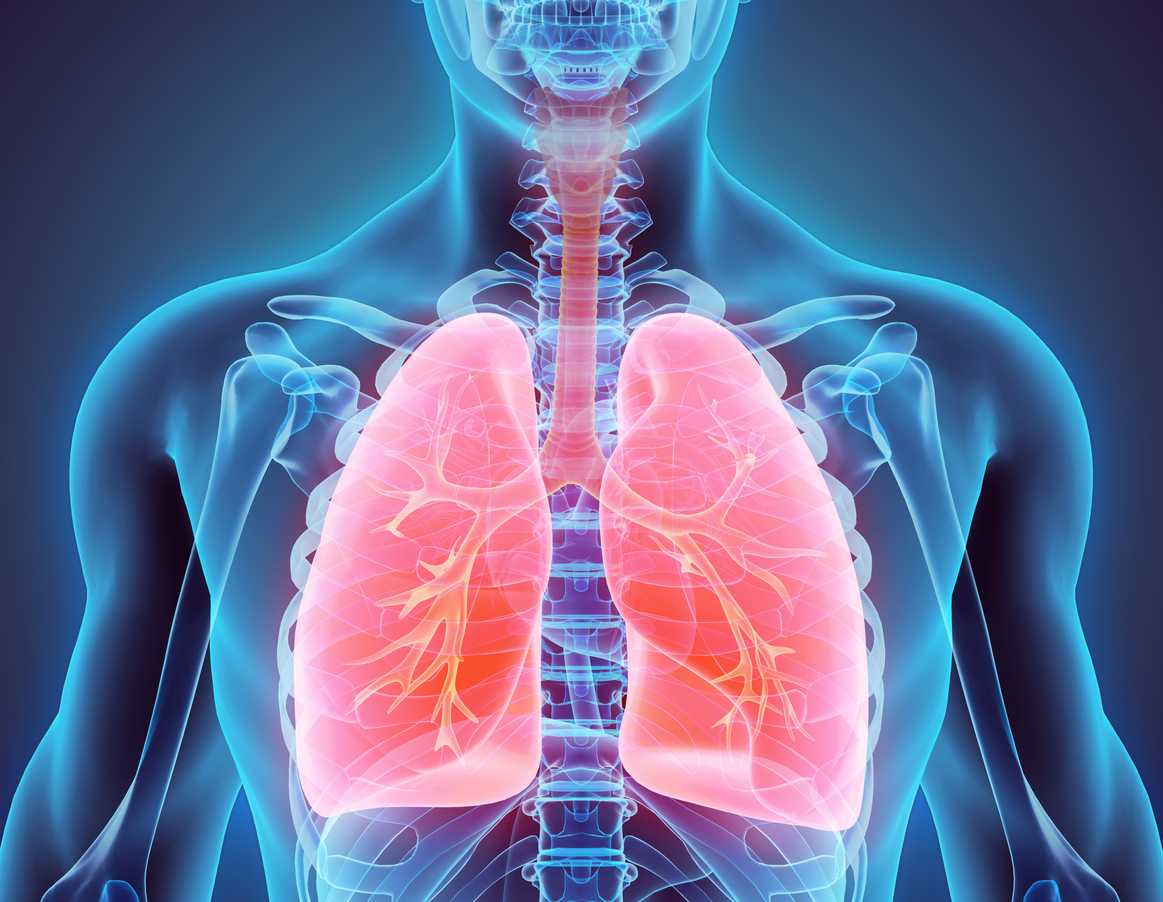 By far the commonest cause of Bronchiectasis in our country is Tuberculosis or previous severe respiratory infections like pneumonia that has damaged lungs. Several other disease can cause bronchiectasis. These include:
• Cystic fibrosis (CF), a genetic condition that results in long-lasting lung infections and reduced ability to breathe. • Genetic diseases like primary ciliary dyskinesia or alpha-1 antitrypsin deficiency
• Immune system conditions that make it difficult to fight off infections
• Aspirating (breathing in) things like fluids, stomach acid, or foods into the lungs
• Allergic bronchopulmonary aspergillosis, an allergy to a particular type of fungus
• Other conditions like rheumatoid arthritis, Crohn’s disease, and Sjogren’s syndrome
• Obstructed airways (airways blocked by something like a tumor or an inhaled object)
• Idiopathic bronchiectasis- when the cause is not known. 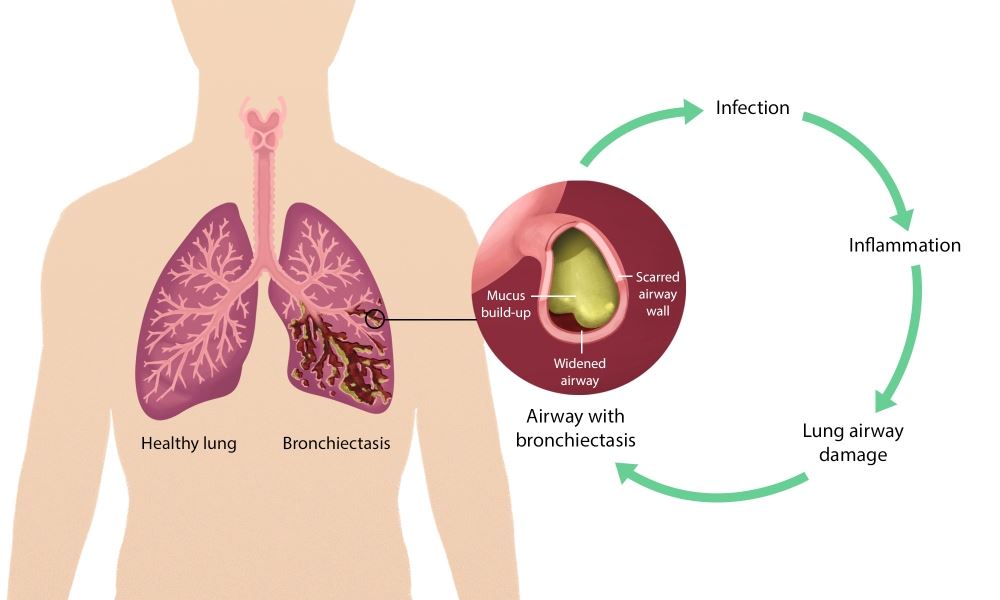 What are the symptoms of bronchiectasis?

The most common symptoms are:
• Productive Cough- Cough with lot of mucus expectoraction
• Hemoptysis Coughing up mucus that has blood in it or blood in sputum
• Chest pain or tightness because it is harder to breathe
• Wheezing or making whistling noises when breathing
• Clubbing of nails
• Loss of weight
• Acute Exacerbation (Flare-ups) with Fatigue, Fever and/or chills, Increased shortness of breath, Night sweats

How is Bronchiectasis diagnosed ?

If the diagnosis is suspected based on a detailed history of symptoms and the findings on physical examination, the following tests are needed to evaluate and confirm the diagnosis:
X-ray or Chest CT scan- imaging tests to show the state of the lungs.
Blood tests and sputum cultures- to find out if there are infections.
Lung function tests- to determine how well a patient can breath in order to assess the impact of disease and also to assess fitness for any treatment.
Bronchoscopy- A bronchoscopy may be required wherein a light and a camera on a tube is inserted through the nose or mouth into the windpipe and then down into the lungs. In the case of blockages, a bronchoscopy can also find and remove the object blocking the airways. The procedure can also be used to obtain lung secretions by Bronchoalveolar lavage (BAL) which is sent for microbiological studies to rule out infection. 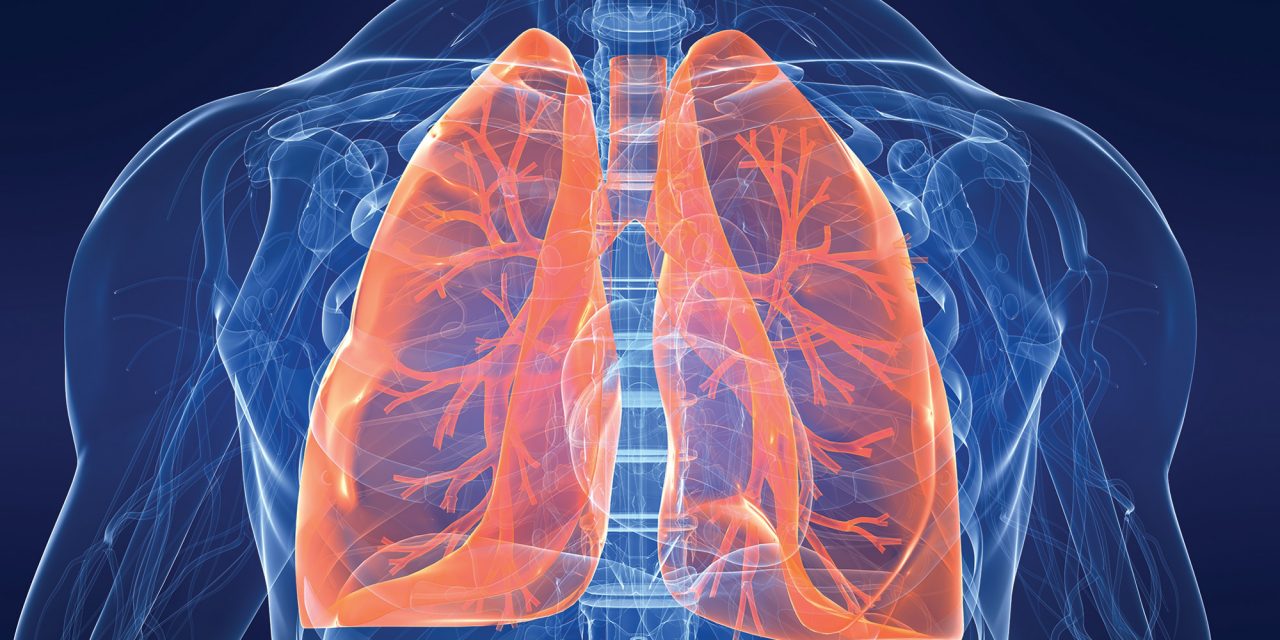 How is bronchiectasis treated?

Bronchiectasis is a permanent damage and, in most circumstances, cannot be cured. But it can be managed and the aim of the treatment is to treat the infection and improve the symptoms along with prevention of exacerbations.
Treatment of the underlying condition causing bronchiectasis like Tuberculosis or other immune system disease must be treated first.
Treatment options include
Antibiotics, Bronchodilators & Mucolytic
Treatment might also include:
Learning techniques (Physiotherapy) and devices to help clear out the extra mucus
In addition, bronchiectasis treatment is broken down further by what stage you are in: there are things that you do daily (maintenance) and things that you do when you are having an exacerbation (worsening). Surgical Treatment
Surgical treatment is considered in carefully selected patients in whom other measures have failed or in those who develop complications despite on medical treatment like haemoptysis (blood in sputum). In some patients the disease is localised to only one portion of lung either a segment or one lobe of the lung. These cases can be considered for surgery which involves removal of the diseased portion. In Some case the whole of one lung is destroyed completely and is a potential source of infection to the other lungs and also leads to limitation of exercise capacity. Such cases may benefit from removal of the diseased lung. This procedure is known as pneumonectomy. The decision to perform surgery is very carefully evaluated in a multidisciplinary discussion along with the chest physicians and the treatment is tailor made for each patient.